Hydronics technology has long been known for unsurpassed heating comfort.

It has also been used for cooling, primarily through chilled-water distribution systems in commercial and institutional buildings.

This well-established and highly successful track record is, in part, based on the thermal properties of water. It is also based on the versatility of hydronic systems in adapting to a wide range of applications. No other heat transport material provides the versatility, safety, reliability, energy efficiency or environmental compatibility of water.

VRF/VRV systems use multiple interior heating/cooling terminal units that have refrigerant passing through them, as illustrated in Figure 1. The refrigerant flow rate through each terminal unit varies, depending upon the heating or cooling load that terminal unit is trying to satisfy.

Weighing options: HVAC system designers, architects and building owners have many choices when it comes to heating and cooling buildings. The choice of system should consider upfront cost, operating cost, long-term serviceability, expandability, reliability, safety and environmental responsibility. With these criteria in mind, let’s exam the benefits that modern hydronic systems offer relative to VRF/VRV systems.

Benefit #1: Hydronic Systems Can Be Used with Many Energy Sources

In some cases, two or more of these heat sources can be combined in the same system. They can share the load based on the most favorable operating conditions for each source.

Likewise, many options exist as sources of chilled water for hydronic-based cooling systems. They include chillers and heat pumps operating on standard vapor compression refrigeration cycles, as well as gas-fired absorption chillers, and even water drawn from large / deep lakes.

When older commercial or institutional buildings are upgraded, their existing hydronic distribution system, or portions of that system, may be reusable in combination with a new central plant for producing heated and chilled water. 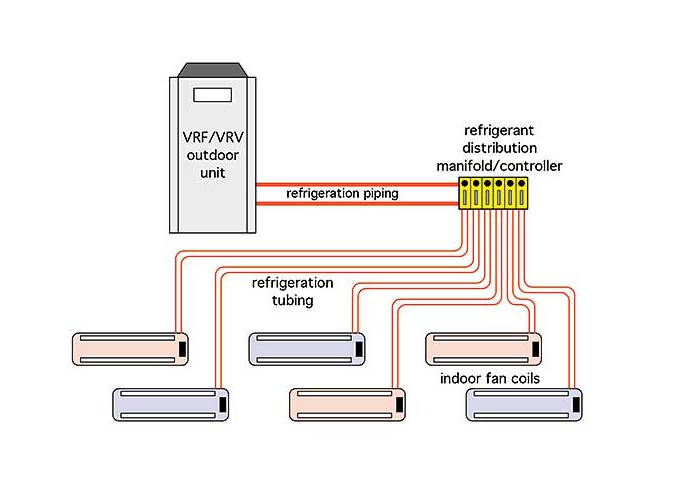 It’s possible for a leak to develop in either a hydronic heating /cooling system, or a VRF/VRV system. A leak in a hydronic system is generally easy to detect, and the material leaking is just water or a mixture of water and antifreeze. Well-designed hydronic systems provide numerous isolation valves that allow the portion of the system where the leak is to be isolated from the remaining parts of the system. Hydronic systems that distribute heating or cooling energy produced by a refrigerant-based source can be designed so that the refrigerant-containing devices are confined to a mechanical room or located outside the building.

A leak in a VRF/VRV system is a serious and potentially dangerous matter. VRF/VRV systems contain much more refrigerant compared to hydronic systems served by a typical heat pump or direct expansion chiller. Under certain conditions, a single leak can be responsible for a complete loss of refrigerant from the system. Large refrigerant leaks can require immediate evacuation of the building and intervention of Hazmat teams.

Refrigerants such as R-410a are heavier than air. If a leak develops in the interior portion of a VRF/VRV system, the refrigerant could accumulate in the lower portions of rooms with highest concentrations near the floor. Such accumulation will displace air in the room. In spaces with minimal ventilation, it is possible for refrigerant concentrations to reach values that could render occupants unconscious and ultimately lead to suffocation.

ANSI/ASHRAE standards 15 and 34 define specific refrigerant concentration limits based on pounds of refrigerant per thousand cubic feet of interior volume, beyond which acute toxicity is expected. Those designing VRF/VRV systems should verify that the amount of refrigerant that could be lost due a leak, and the smallest space into which this refrigerant could accumulate, are in compliance with this standard.

Although proponents of VRF/VRV systems point out that no circulators are needed to move refrigerant throughout a building, electrical energy is still required just to move refrigerant gas and liquid through piping. That energy is supplied as electrical input to the system’s compressor(s). The electrical energy consumption for moving refrigerant through a VRF/VRV system, per unit of heat or cooling energy delivered, is significantly higher than that required for a well-designed hydronic system as shown in Figure 2. 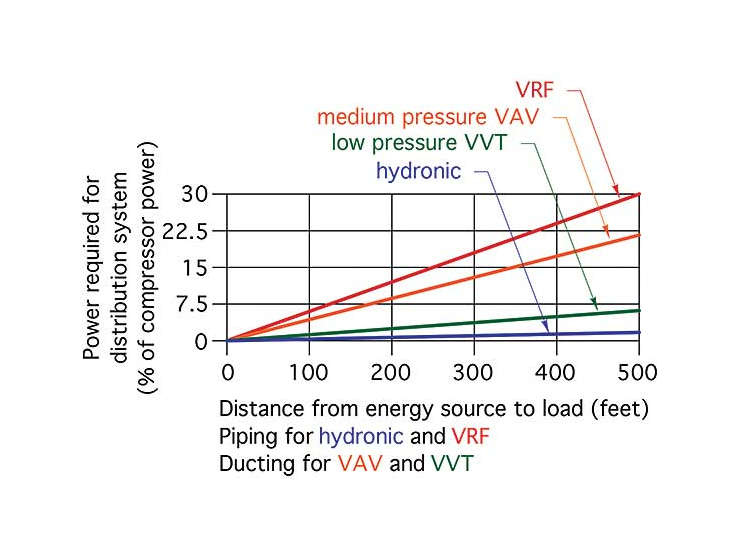 This graph compares the energy required to move cooling effect through a building. It assumes that the thermal energy is supplied by a vapor/compression source such as used in a VRF/VRV system. The vertical axis represents the percentage of the compressor power required to move (not create) the cooling effect generated by the refrigeration system. The horizontal axis represents the distance from the thermal energy source (e.g., boiler, outdoor unit, etc.) to the load.

Benefit #5: Hydronic Distribution Systems are not Dependent on Specific Refrigerants

Hydronic systems are not subject to radical redesign or modification based on future changes in refrigerants. Over the last two decades, highly successful refrigerants such as R-22 have to be phased out of the North American market due to concerns over their global warming potential.

Many heating and cooling systems can benefit from thermal storage. The high heat capacity of water makes it an ideal thermal storage material for both heating and cooling systems. The heated or chilled water may be produced by heat pumps or chillers at times when “off-peak” electric utility rates are in effect, which significantly reduces the cost of delivered thermal energy.

The use of thermal storage for space heating and cooling with VRF/VRV systems is not practical. While it is possible to transfer heat from refrigerant to water using heat exchangers, it is not practical to recover that heat back into refrigerant for subsequent delivery to VRF/VRV terminal units.

VRF/VRV systems use copper tubing. Figure 3 (on Page 88) shows some of this tubing being installed in the hallway of a commercial building. A multistory building with such a system could contain several thousand feet of copper tubing, with hundreds of brazed or flared joints. Hydronic systems can use larger piping for mains and thus reduce the linear footage of piping and joints that needs to be installed.

Hydronic radiant panel heating has long been recognized for providing unsurpassed thermal comfort. Warm water from a variety of heat sources can be supplied to these panels. They create interior surface temperatures and air temperature profiles that are ideal for human comfort. They operate silently, with minimal air movement, and deliver heat to spaces using a fraction of the distribution energy required for forced-air systems or VRF/VRV systems.
VRF/VRV systems are limited to air as the final means of conveying heat or cooling effect from refrigerant into heated spaces. As such, they are not well-suited to interior spaces with tall ceilings, or applications where internally generated dust would quickly clog air filters.

In addition to space heating and cooling, hydronic systems can be configured to provide high-capacity domestic water heating, snow-melting and pool heating. These ancillary loads can be prioritized to reduce the total thermal capacity needed. VRF/VRV systems are not currently used for such ancillary loads.

A well-designed and properly maintained hydronic heating or cooling system is a long-term investment. Although the life of the original heat source or chiller is typically 15 to 25 years, the distribution system (e.g., the piping, valves, heat emitters and terminal units (cooling)) can usually provide many decades of service. Many hydronic systems that were installed over 50 years ago remain in operation today.

The 2015 ASHRAE Applications handbook lists the medium service life of air-to-air heat pumps, and similar refrigeration-based HVAC equipment using fixed-speed compressors and outdoor condenser units at 15 years. There is no listing specifically for VRF/VRV /VRV equipment because of its relatively new use in the North American market. Anticipated life expectancies should be similar to air-source heat pumps with outdoor condenser units.

The piping, valves, circulators and terminal units required in most hydronic systems can be sourced from many companies with distribution networks across North America. This provides options when the system is initially designed, as well as when maintenance or replacement parts are needed in the future.

Most VRF/VRV systems are manufactured in Asia, and many use proprietary components. The availability of these specialized components may be more limited, especially in emergencies where they are needed quickly.

In hydronic systems, an accurate measurement of flow rate and temperature drop (from supply to return) allows for a simple calculation of the rate of heat transfer. The total thermal energy that passes a specific point in the system can also be determined by integrating these measurements over time.
Several companies now offer “heat metering” hardware that can be easily installed in a wide range of hydronic heating and cooling systems. Figure 4 shows two examples of ultrasonic-based heat meters that can be used in applications such as apartments, condominiums and leased commercial space.

Heat-metered systems allow owners of multi-tenant buildings to know what each tenant’s thermal energy use was, and to invoice them accordingly. Such systems can centralize heat production and chilled water production, which provides many technical and economic benefits.

Closing arguments: Water remains the “gold standard” when it comes to moving thermal energy through buildings. Hydronic systems can provide decades of reliable, safe and efficient delivery of heating or cooling from a wide variety of sources. They can expand as building configurations change, and be retrofitted with different heating and cooling sources as energy markets change, or the original heating / cooling sources reach the end of their service life.

Be sure to consider the points discussed above when evaluating options for future heating and cooling systems.

10 comparisons between hydronics and VRF/VRV systems