Higher-efficiency circulators are here to stay

Wet-rotor circulators have been used in millions of residential and light-commercial hydronic systems over the last four decades.

Many hydronic pros consider them “commodity” components. They’re available from a long list of suppliers, most of which provide equivalency charts so installers can quickly switch from one make and model to another.

Wet-rotor circulator technology got to where it is today through continuous design and manufacturing improvements and good value engineering. Along the way there were successes and failures, lessons learned and patents filed.

Consider this: A small wet-rotor circulator gets installed in an environment that’s hot, wet, pressurized, potentially corrosive and likely littered with some amount of dirt, metal chips or other debris. That circulator is expected to perform within that environment for at least 20 years with zero maintenance. I have several wet-rotor circulators in my own house that were manufactured in the 1970s and have performed flawlessly to this day.

What other electrically-powered device with moving parts could match these expectations? Dishwashers, refrigerators, washing machines? There’s virtually no chance most currently manufactured appliances will last as long as a wet-rotor circulator. The circulator manufacturers have done a good job!

Given this record, why would the industry have any interest in replacing or upgrading a product that performs so well?

The predominant driver is energy efficiency. Manufacturers strive for efficiency gains from a competitive standpoint, while energy-related government agencies encourage or even mandate improvements.

Although relatively inexpensive and reliable, a typical wet-rotor circulator with a permanent split capacitor motor is not very good at converting electrical energy into mechanical energy (e.g., what the hydronics industry calls “head”) and imparting that energy to the fluid in a system.

There are several reasons for this. A wet-rotor circulator needs a larger gap between its rotor and stator coils compared to the gap in an air-cooled motor. This decreases motor efficiency. So does the need to induce a magnetic field in the rotor of a PSC motor relative to other more recently developed motor options. The price at which these products go to market, combined with performance expectations doesn’t allow for mechanical detailing such as polished volutes, internal turning vanes, tiny clearances between the impeller and volute or precision ball bearings to support the rotor shaft. 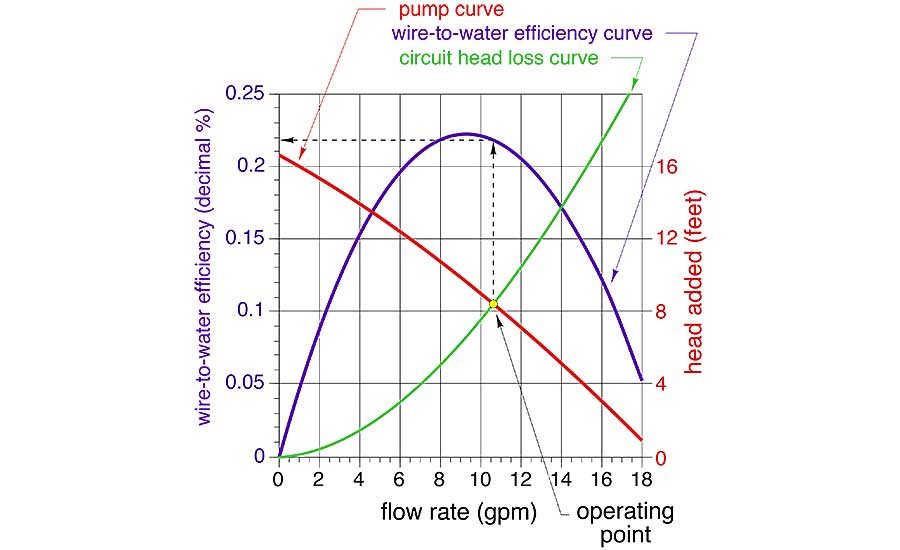 Study the curves: Figure 1 shows several curves that determine and describe the performance of a small wet-rotor circulator with PSC motor. They include the pump curve, circuit head loss curve and “wire-to-water” efficiency curve.

The green curve is a circuit head-loss curve. It shows the ability of a piping circuit to dissipate head energy from the fluid as it passes through the circuit. This curve is determined based on pipe material and size, as well as the fittings, valves or other flow-through devices in the circuit and the characteristics of the fluid being circulated.

The flow rate at which the circuit operates is found by drawing a line downward from the point where the circulator’s pump curve crosses the
head-loss curve of the piping circuit. That point is appropriately called the “operating point” for that specific combination of circulator and piping circuit.

In an ideal application, the circulator’s operating point falls directly under the peak of the wire-to-water efficiency curve. However, designing systems that operate at this “sweet spot” is the exception rather than the rule. Still, it’s an ideal to be aware of and strive for when refining system design. A guideline I suggest is to select a circulator so the operating point falls within the middle-third of the pump curve.

Motor matters: Over the last decade, many of the fans and blowers used in residential and light-commercial HVAC equipment have transitioned from permanent split-capacitor motors to brushless DC motors. The latter are often called ECMs, which stands for electronically commutated motor. Brushless DC motors use permanent rare-earth magnets within their rotors. The magnetic field produced by these magnets is very strong, resulting in motors that offer higher torque and more power, while also being significantly smaller than PSC equivalents.

In modern high-efficiency circulators, the permanent magnet is sealed inside a stainless steel “can” that’s fastened to the shaft and impeller assembly. That assembly rotates to follow the moving magnetic fields created by the wire-wound stator poles that surround the rotor as shown in Figure 2. 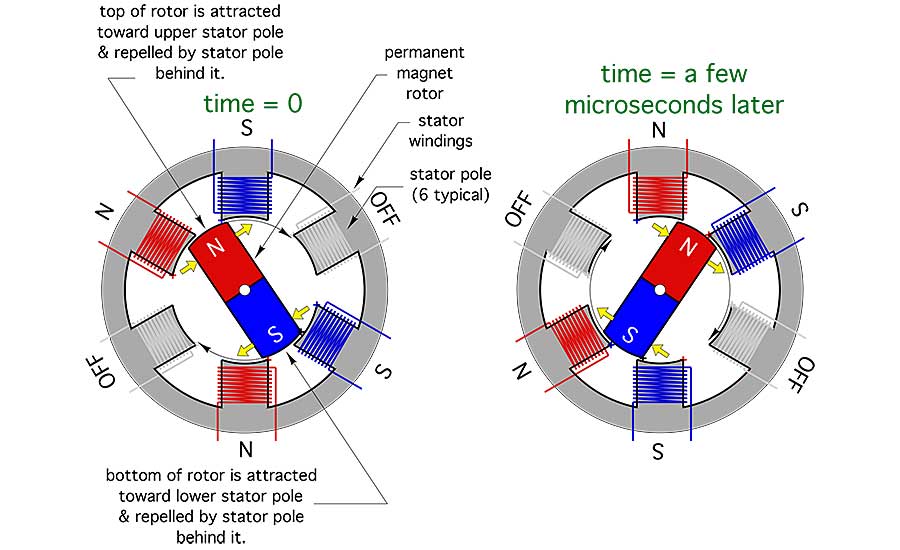 Figure 2 shows that the assembly rotates to follow the moving magnetic fields created by the wire-wound stator poles that surround the rotor. Photo credit: John Siegenthaler.

The magnetic polarity of a stator pole can be rapidly switched by alternating the direction of electrical current through the pole’s winding. This switching is regulated by a microprocessor within the circulator. The frequency at which the polarity is switched and the precise timing of these changes allows the circulator’s impeller to spin over a wide range of speed. That speed can be controlled by anything that properly communicates with the microprocessor. This includes predefined control modes that are
factory-programmed into the circulator’s nonvolatile memory, as well as signals from external controllers. The latter includes analog inputs such as a variable 0-10-volt DC signal or digital inputs supplied as a predefined pulse width modulation signal. Larger high-efficiency circulators also can be configured to accept signals from building- automation protocols such as BACnet, Modbus or LonWorks.

Constant vs. proportional ∆P: Two common operating modes that are factory-programmed into the nonvolatile memory of many high-efficiency circulators are:

These operating modes allow the circulator to be configured based on the piping system in which it will be used. Both operating modes are intended for use in multi-branch systems where each branch contains a valve to regulate flow. These valves might be simple zone valves that are either fully open or fully closed at any given time. They also could be modulating valves. Two examples of the latter are thermostatic radiator valves and motorized 2-way globe valves.

Both ∆P operating modes adjust differential pressure so the flow rate in a given branch remains as stable as possible while flow in other branches changes. For example, if the design flow rate through Zone 1 of a 4-zone distribution was 2 gpm when all other zones are open, it should remain close to 2 gpm regardless of what’s happening with flow in the other zones.

The ∆Pc operating mode is best applied in systems where the head loss of the branch circuits is much greater than the head loss of the common piping. The latter is the piping through which all system flow passes. It includes the headers serving the branch circuits and usually some additional piping carrying flow through a heat source, hydraulic separator or heat exchanger.

The head loss of the system’s common piping should be kept as low as practical. Keep headers short and generously sized. If the heat source has high head loss characteristics such as a compact heat exchanger in a mod/con boiler or a coiled coaxial heat exchanger in a heat pump, isolate that head loss from the common piping using a hydraulic separator, closely spaced tees or a buffer tank.

One of the best examples of systems where ∆Pc is well-applied is a homerun distribution system, as shown in Figure 3. 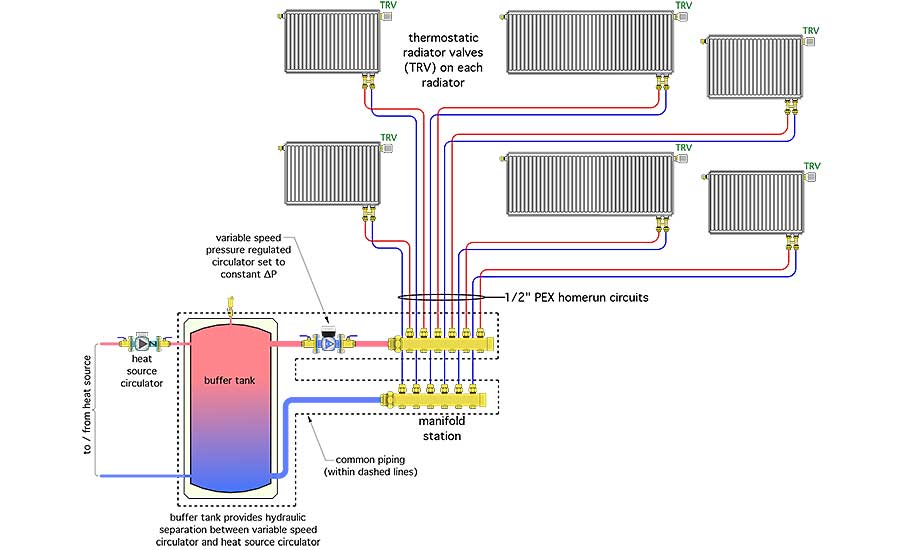 Figure 3 shows one of the best examples of systems where ∆Pc is well-applied is a homerun distribution system. Photo credit: John Siegenthaler.

The common piping in Figure 3 is outlined by dashed lines. It consists of short headers, generously sized piping and a buffer tank that provides hydraulic separation between the heat-source circulator and the variable-speed distribution circulator. 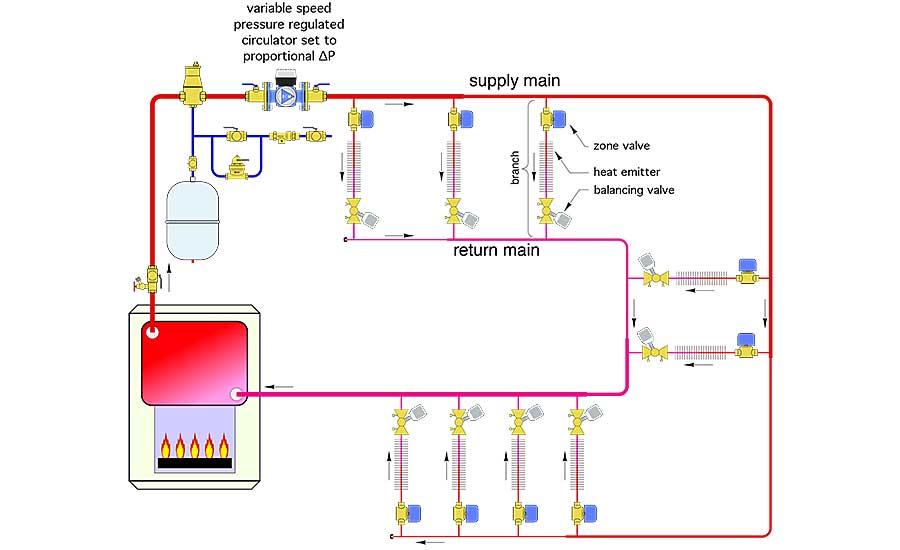 When operating in ∆Pv mode, the head produced by a circulator decreases linearly with decreasing flow rate.

The head added by the circulator at zero flow rate typically is constrained at 50% of the head setpoint for design load (e.g., the head required when all branches
are at full flow). This relationship between head and flow, combined with the characteristics of a 2-pipe distribution system, create conditions that maintain relatively stable flow through each branch regardless of flow in other branches.

And, unlike a differential pressure bypass valve that regulates pressure by dissipating excess head energy, both ∆Pc and ∆Pv operating modes reduce electrical power demand by the circulator whenever flow or head decreases. Estimated operating cost savings vary by manufacturer, model and operating mode, but claimed savings range from 60% to as much as 90% compared to fixed-speed circulators with comparable hydraulic characteristics and AC induction motors.

Additional capabilities: Some high-efficiency circulators have built in firmware routines that pulse the impeller at startup to dislodge any entrapped air. Some also have built-in temperature and flow sensors. When combined with another temperature sensor on the opposite side of the circuit, some high-efficiency circulators can be set to maintain a fixed temperature difference between the supply and return sides of the circuit. Some can even calculate and report the rate of heat transport in the circuit based on an internal flow sensor combined with two temperature sensors.

What’s ahead: In Europe, the use of standard circulators with PSC motors in standalone applications (e.g., those not integrated into a product) ended in January 2013. Only circulators meeting energy use limits established through simulated usage profile testing can be legally installed in European Union countries. Standard wet-rotor circulators with PSC motors, which still are extensively used in North America, fall far short of these limits. By 2020, European energy use standards also will apply to all new and replacement circulators integrated into products such as hydronic mixing modules or pumping stations.

The U.S. Department of Energy currently is working with industry stakeholders to develop energy efficiency standards for smaller hydronic circulators. Although still a work in progress, the eventual standards are likely to set target energy use thresholds not achievable by circulators with PSC motors.

When it comes to moving water through hydronic systems, high-efficiency circulators with brushless DC motors are the new norm.

This article was originally titled “The new normal” in the October 2017 print edition of Supply House Times.