There are many ways to define a great company.

Founded in 1923, by Henry Charles Oswald, Oswald Supply is family owned and operated through four generations and has a rich history centered on supporting heating systems throughout New York City. Over the past several decades, Oswald has expanded their presence nationally to support municipalities, housing authorities, heating and cooling contractors, and industrial supply distributors. From the very beginning, Oswald Supply serviced both boiler systems and refuse incineration systems.

“At one point New York City was incinerating garbage, not compacting it as we do now,” says Bob Oswald, fourth-generation family leader. “Incinerators and boilers are both very similar in design and at the time they both used cast iron grates and fire doors. That’s why we incorporated the two product lines, specifically repair parts, and established them as Oswald Supply mainstays.” Boilers, heating repair parts and trash chute doors are still the company’s top selling product lines today.

A good company focuses on building a business that fulfills the needs of customers and their employees. A great company looks past this and has the vision to support their industry and their community. Oswald Supply is and has a longstanding history for being known for both.

For example, a great company is one during the most recent time of crisis — the early days of COVID-19 in 2020. Oswald found ways to protect and support their employees, while still servicing customers. Heating repair parts were in demand, yet the workforce was struggling with health issues. Oswald Supply remained open as a “necessary business,” operating skeleton shifts to provide critical components, keeping heating systems operating throughout the country.

“Our grandfather and father instilled in us the importance of taking care of your team,” Bob Oswald says. His son, Robert describes the beginning of COVID-19 in New York. “It was like nothing I’ve ever seen. The city was vacant, and it was nearly impossible to get material. But we managed to stay operational and respond to those calls for hard-to-find heating supplies.” 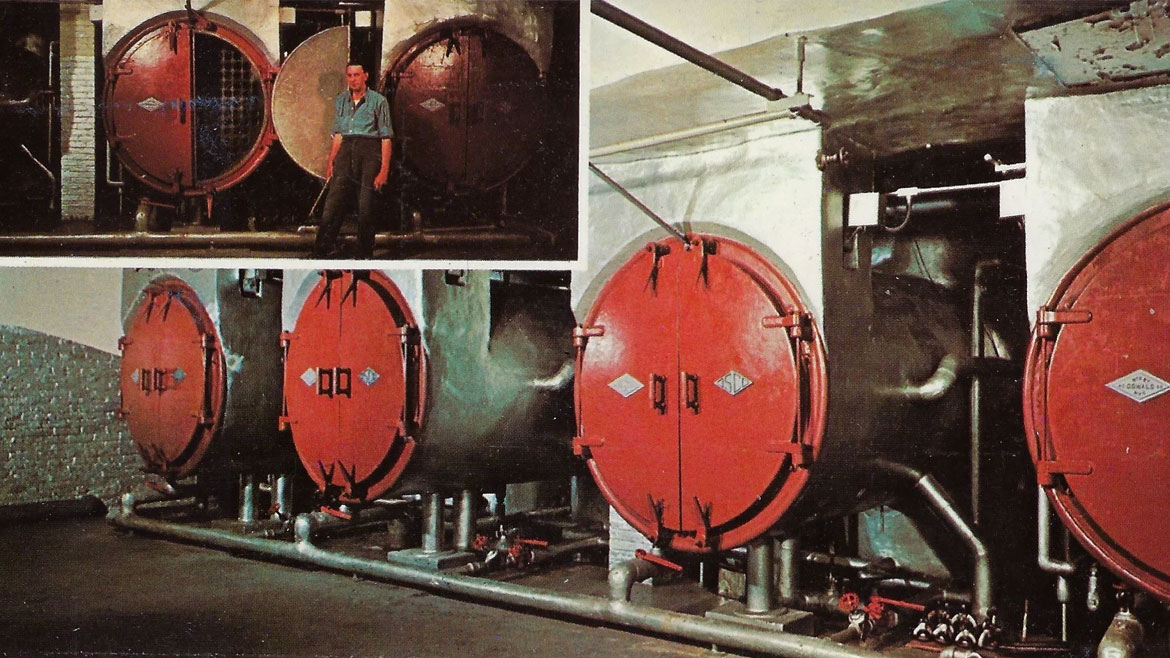 Founded in 1923, Oswald Supply is family owned and operated through four generations. 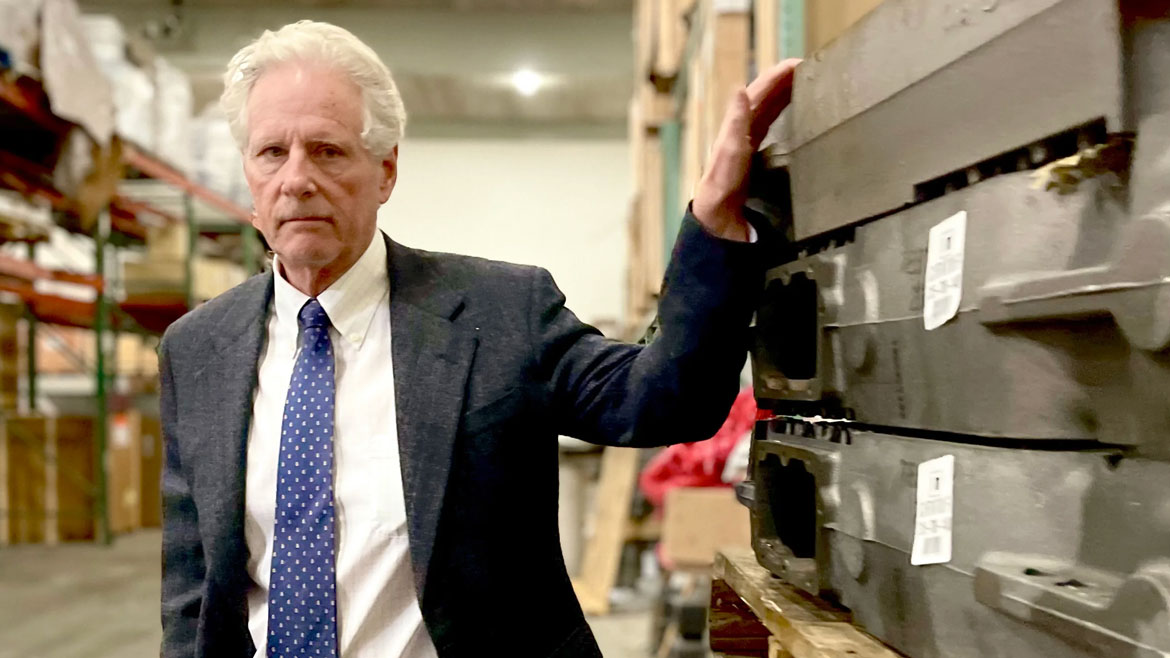 Being located in The Bronx, New York, the company found itself in the thick of things as 9/11 unfolded.

“Through 9/11 — a time when many New York businesses shut down — Oswald Supply remained open to serve any first-responder needs or orders,” says Amy Santucci, director of operations and marketing. “And the same with COVID-19; we never closed or stopped serving customers.”

Bob Oswald recalls that as far back as the 1940s, Harold Oswald, his uncle and second-generation family president made important decisions to help New York City throughout World War II.

“In the 1940s most boilers had converted from coal to oil, but the country needed oil for the war effort,” Bob Oswald explains. “Oswald Supply was instrumental in the conversion back to coal. We made complete cast iron sets of grates, so boilers could convert from oil back to coal. We worked twenty-four hours a day with three different crews. One crew would go in and rip out the existing oil chambers and burners. We had the foundries make the castings and grates for us. They’d come to our machine shop in Harlem, and we'd machine them, assemble them, mark them and then our third crew would go out and install them.”

Oswald’s core values remain the cornerstone in every decision made during each of the ten decades that the company has remained in business.

KNOW HOW AND KNOWLEDGE

Ten years ago in 2013, Supply House Times’ columnists and heating industry legend Dan Holohan wrote a story explaining that Oswald Supply was known nation-wide for their extensive expertise in boilers of all ages.

“We get calls from customers all over the nation, looking for that unique hand hole plate they need to keep their 100-year-old boiler running. They call because they see no reason to replace a good boiler if all you need is a plate,” Robert Oswald, fourth-generation family leader says. “100 years in business carries a lot of history, as well as an extensive inventory. I love finding that hard-to-locate part for customers, possibly the last one in existence. Then I get back on the phone and tell the customer that their boiler will be able to run for another 60 years if they choose to keep it running.”

Oswald Supply’s commitment to fulfilling the needs of their diverse customer base is a staple in its operations today, just as it was 100 years ago. 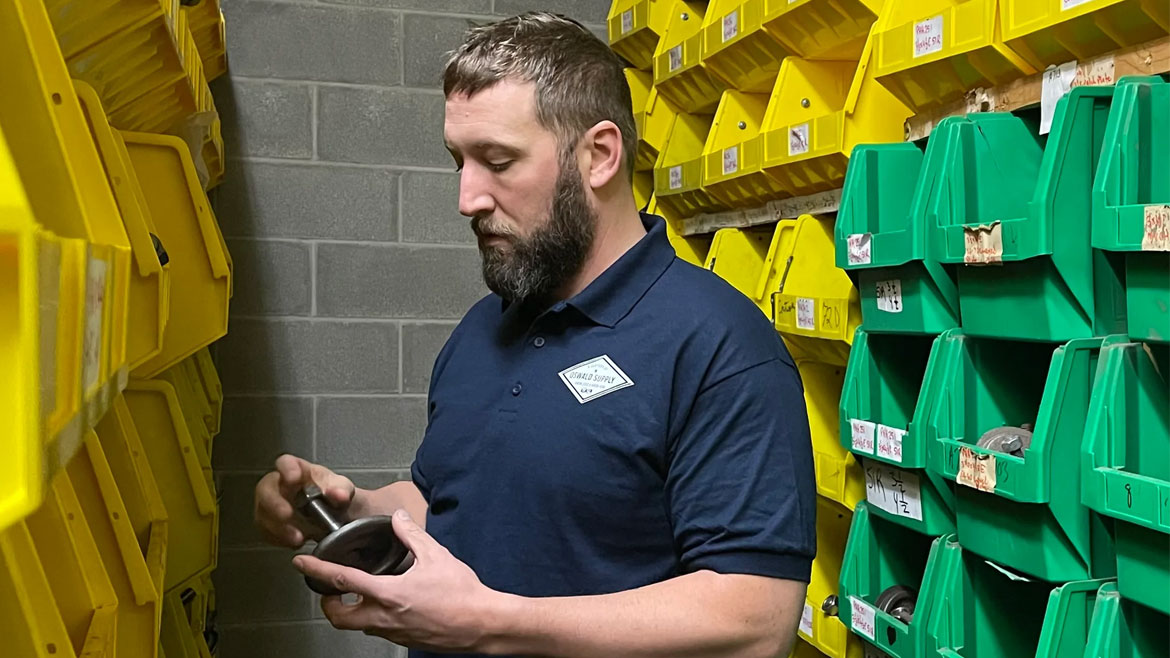 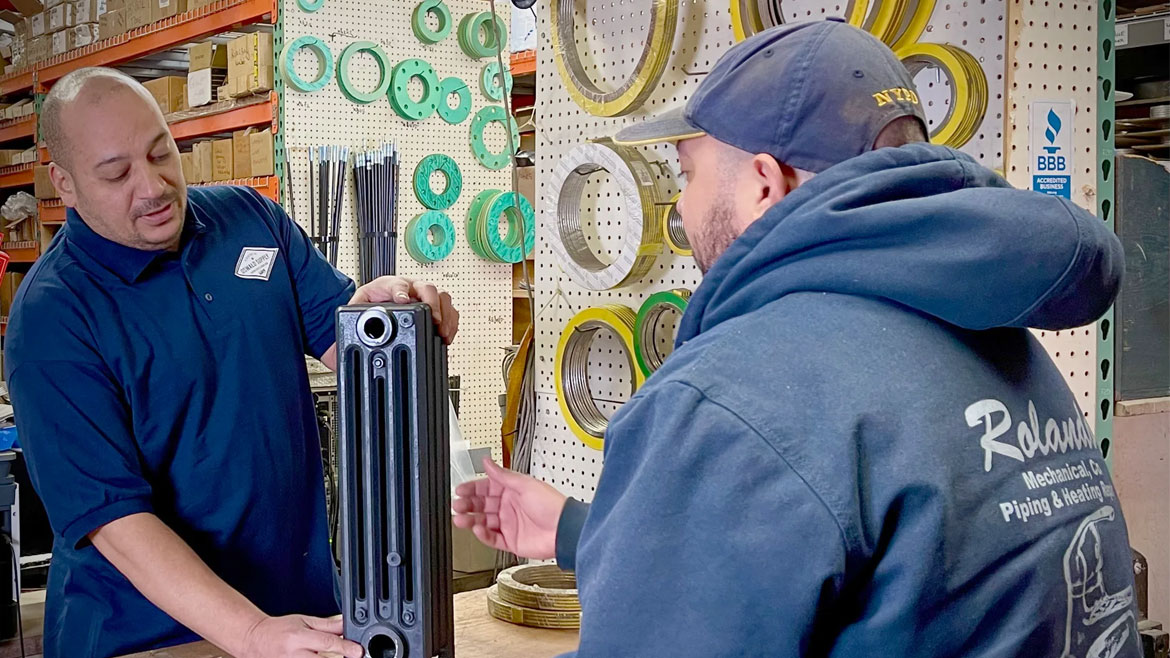 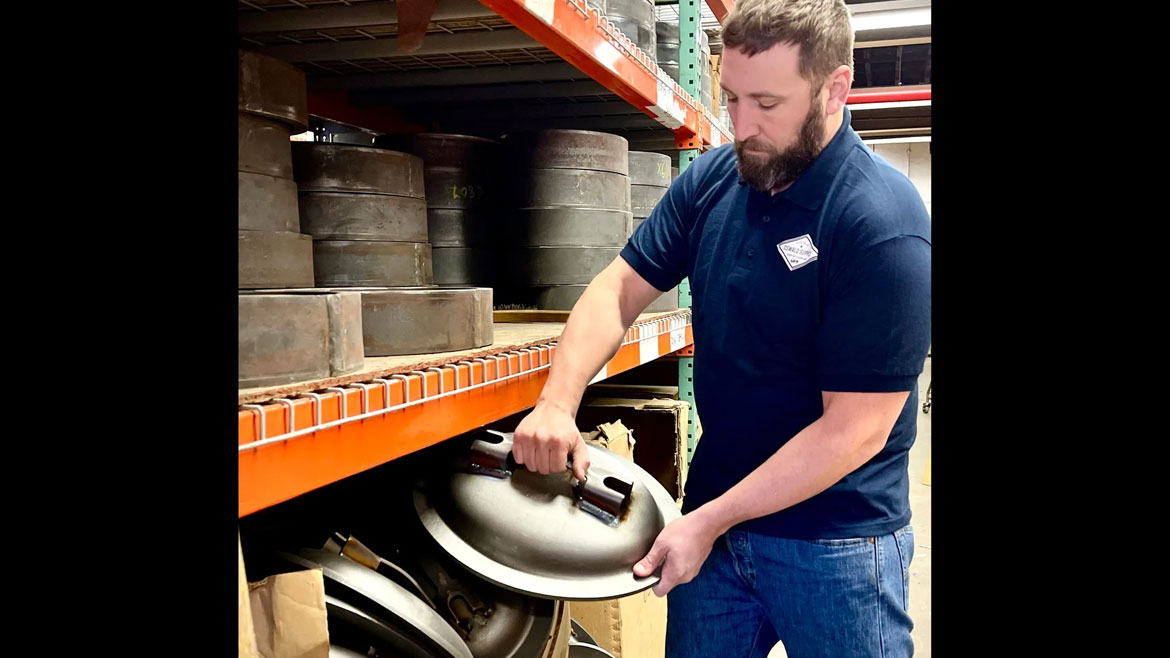 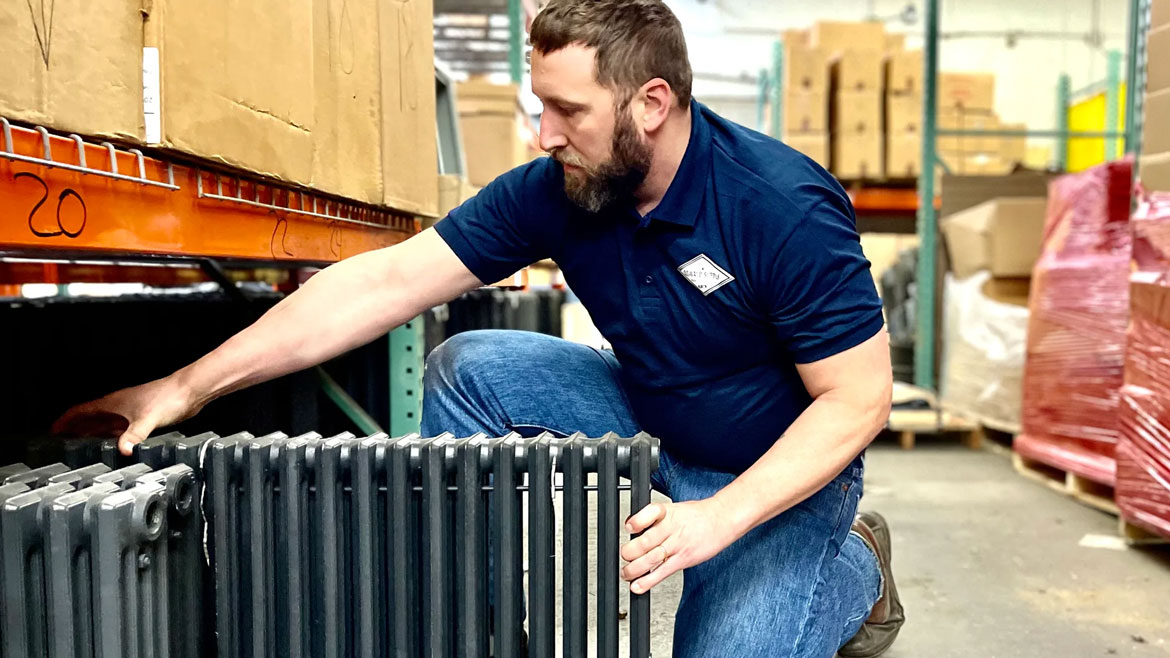 Bob Oswald says, “Our customer support is unparalleled. Customers appreciate being able to talk to one of the owners or an Oswald support specialist with whom they have built an on-going relationship over the years. We don’t have a massive remote call center, it’s the Oswald team that answers each and every phone call. An unwavering commitment to providing first-class, first-name service is why we’ve retained accounts that span the decades.”

Heating technology continues to advance. Having been around for 100 years, Oswald Supply is committed to providing parts for both the new and the old.

“Times change and over the decades heating systems evolved from coal to oil and gas. Oswald Supply had the foresight to acquire patterns and patents for discontinued boiler lines, so we can provide replacement parts for all heating systems,” Bob Oswald says. “More recently, as high efficiency boilers dominate the heating industry, we provide the new boilers and components to support evolving heating technologies. Ultimately, heating is an integral part of climate control systems which opens a whole new market for heating, cooling, ventilating controls, supplies and parts.”

“The company’s visionary practices started with Henry Charles Oswald, who took the extra steps to go to all of the major boiler companies as they discontinued boiler lines to secure their patterns so that Oswald could manufacture replacement parts for these older boilers,” Robert Oswald explained, “Manufacturers didn’t want to be bothered by orders for one-off parts, so they referred those customers to us. Oswald’s ability to manufacture parts has been a mainstay contributing to the longevity of our company.”

Bob Oswald says the transition from generation to generation has been relatively seamless. “Our succession has been very smooth over these four generations, which is unusual for family businesses,” he says. “We’re blessed that the Oswald family is in accord with our company’s values. It’s a bonus that we enjoy each other outside of work, which is infused in the culture of Oswald Supply.”

Bob Oswald adds that Robert Oswald has done great work since he joined the family business in 2009 to bring the company into the 21st century. “He built out a robust e-Commerce platform, created our Amazon and Walmart online stores and continues to enhance our digital relationship with customers nationally. Additionally, he has opened up Oswald’s product line to support new, efficient heating technologies, and continues to maintain solid relationships with an ever-expanding network of suppliers,” he says. “Young blood coming into an established business brings vitality and perspective, and I believe that each generation of Oswalds brings something new to the business.”

Representing the next generation of heating professionals, Robert Oswald took decades of hand-written records and converted this historic information into a searchable database. “I organized them, I digitized them, and then we created the eCommerce website enabling heating contractors in the field to source needed parts, using these searchable data points,” he says. “Based on my father’s and grandfather’s notes, we are able to direct customers to the parts they need on our user-friendly online platform.”

Oswald Supply took the customer experience at the service counter and replicated it online which provides customers across the U.S. access to the same personalized service offered throughout the company's history. “It’s our Virtual Counter, another extension of our business that offers the expert customer service we are known for,” Robert Oswald says.

Although it’s important to stay ahead of technology and adapt to changing times, Bob Oswald points out that if you never lose sight of your purpose, it doesn’t matter what vessel you use to reach your customers or what product technologies are headed your way. His son, Robert Oswald has been the architect of enabling the company to flourish as business embraces the digital age. Whether it’s electric, oil, coal or solar, it’s all about the same end result — safe and effective climate control.

Bob Oswald says the recipe for success at Oswald is pretty simple: hard work, perseverance, family values and a belief that customers deserve the best service and product available.

“It’s all about family,” he says. “It’s about the family of customers coming in, the incredible team of employees, our family of manufacturers and this is what the Oswald family stands for.”

Catherine Barton is the executive director at Pinwheel Studio Inc. and has more than twenty years of experience working with brands and manufacturers on sustainable communications.