Last time, a panel of five blue-chip PHCP-PVF distribution executives talked about topics such as current market conditions, the industry-wide labor shortage and how the current-day distributor can thrive long-term during the exclusive eighth-annual American Supply Association/Supply House Times distributor roundtable interview that occurred during NETWORK2017 at the Omni Nashville Hotel.

See here for Part 1 of the interview, which appeared in the January issue of Supply House Times. In the second part here, distributors discuss the importance of the ASA, the evolution of buying groups and how to retain the millennial generation of employees.

Question: How important is the American Supply Association to today’s PHCP-PVF distributor, manufacturer and manufacturers representative?

With the momentum ASA continues to build and the services it offers to its members, the answer to this question was unanimous. “ASA is very important,” Cregger Co.’s Donohue said. “As a group, it gives you an opportunity to discuss problems like we are discussing here right now and then we address them. One of the biggest things for us in our career-development program and with attracting and retaining employees is the ASA education part. We incorporate that into our training program and take these young employees through the entire program. That program for a year certainly is a critical part of what we do in our company and provides tremendous value to us.” 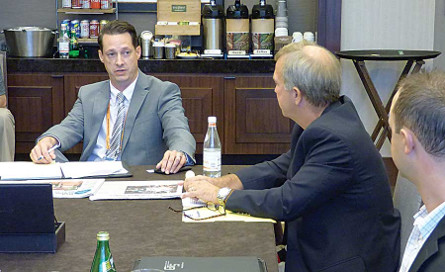 Taylor went a step further with ASA’s importance to Columbia Specialty. “We use ASA in just about every aspect,” he said. “We train and use their education program. We advocate through our form of government. One of the things that doesn’t get mentioned is we have benefitted from the speakers and the side partners we find through ASA. A couple years ago they had a gentleman speak on pre-employment tests (Supply House Times columnist Dr. Michael Mercer). We started using him for our pre-employment testing with tremendous success. Dirk Beveridge (another ASA speaker and Supply House Times columnist) is a great guy and someone we’ve partnered with. That’s the part of the value ASA brings, especially to NETWORK when you show up. Every year there I get stuff that is valuable to my company.”

JABO Supply’s Bazemore said being involved in the special-interest and market-specific groups within ASA has helped him in recent years. “When you are in a special-interest group you can dive into those details even more and build even greater relationships,” he said. “Emerging Leaders (formerly Young Executives) is very rewarding and then coming up through the Industrial Piping Division and being chairman was a fantastic experience. These are relationships and bonds you will keep with you forever.”

Question: How has the landscape with freight/shipping costs changed in your company?

This question came toward the tail-end of the hour-plus-long interview and elicited some interesting responses. “It impacts us because we travel a large territory,” Donohue said. “You have to be cognizant of Department of Transportation regulations with drivers being on the road for certain amounts of time. It’s also affected us with general freight coming in due to a shortage of truckers. We’re seeing longer lead times and that has an impact on all of us because everything in the country moves by freight.”

Taylor said freight costs factor into the profitability equation in a big way. “I had a mentor way back who told me where you really make the difference in your profitability is in the expense lines and freight is one of those expense lines,” he said. “It’s one place where you should really pay attention. What’s going on with freight, the cost of it and the way you buy all falls into that category. It’s a place where you either bring in a few dollars to the bottom line or you will cost yourself.”

Christiansen is noticing a developing trend of companies following generals’ leads on projects, regardless of location. “More and more you see customers following generals to far-away places,” he said. “We are making more longer deliveries than we ever have. It’s tough when you have a six-hour ride one way and does your driver have to spend a night in a hotel? It’s hard to pass freight costs down to customers. It all kind of revolves around regulations. The higher the regulations the more freight costs go up.”

Question: How important are buying groups in today’s marketplace?

Like the question about ASA, the panel placed high value on being part of an industry buying group. “We find our buying group (AD) to be very valuable,” George T. Sanders Co.’s White said. “They recently have put a concerted effort behind e-commerce and that will be a huge step forward for everybody in the group.” 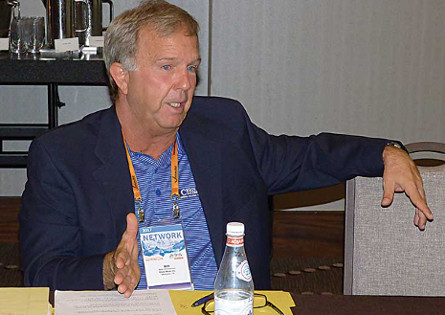 Chris-More Inc.’s Bob Christiansen is noticing a trend where customers are following general contractors to jobs further and further away from their home bases, thus increasing freight costs. “It’s hard to pass freight costs down to customers,” he says.

Taylor added: “The buying group is a great equalizer for us with the big multi-national locations. Before when we didn’t belong to a buying group, we didn’t have access to some of the product lines, some of the partners and the pricing levels we have today.”

Christiansen said buying groups fill a different niche than ASA and regional distributor groups such as Southern Wholesalers Association of which Chris-More Inc. belongs to. “You can’t sit with guys at ASA and have an open-book discussion because they might be a direct competitor. At Embassy (Chris-More’s buying group) they are not direct competitors,” he said. “We’re all buying for a common goal.”

Donohue predicts the buying-group landscape will continue to evolve in the coming years. “I think the focus and purpose of buying groups will change,” he said. “Before, buying groups were there to leverage and gain collectively with purchases. I don’t know if there is a whole lot of room left on the program side for manufacturers so those other things buying groups provide from a support standpoint is where the greater importance for buying groups will be moving forward.”

Question: How does the current-day distributor keep the millennial generation in its company?

With this question, panelists agreed companies must put an emphasis on finding ways to retain those valuable younger-generation employees.

“Getting their participation in forming your strategy and corporate culture will keep them there,” Donohue said. “Getting millennials involved in your organization in important positions and having them participate in retention programs will be critical. You need people who think like that generation thinks.”

Bazemore added: “With the younger generation, it means a lot to them if you show them you are investing in them and spending real dollars to upgrade things such as education.”

Taylor said the younger generation comes to the table with a different but highly desirable mindset. “It’s not just a paycheck for these kids,” he said. “They value their time and they value what their impact is on your company. They like to be part of a team and feel like active stakeholders in a business.”

This article was originally titled, “Music to their ears: Part 2” in the February 2018 print edition of Supply House Times.

Mike Miazga: How bad is the current labor situation?