The National Kitchen and Bath Association (NKBA) had a monumental year in 2022. It kicked off with the first in-person Kitchen and Bath Industry Show (KBIS) event since 2020. Additionally, in October, NKBA moved from Hackettstown, New Jersey to its brand new headquarters in Bethlehem, Pennsylvania. The move was initiated with a bike ride from the old headquarters to the new. Things don’t slow down in 2023; NKBA will celebrate its 60th anniversary along with the 10th year since KBIS and the International Builders’ Show (IBS) joined forces to create what is now known as Design and Construction Week (DCW)’s NAHB Builders Show.

2022 is also Bill Darcy’s 10th anniversary as the CEO of NKBA. Since his tenure began, NKBA has benefitted from his proactive, risk-taking nature as he ushered in a new governance structure, new sustainability initiatives, the co-location of KBIS/IBS and several other key NKBA programs.

According to Darcy, the key to launching these changes while increasing NKBA membership retention and revenue growth was “bringing a for-profit business mentality to a non-profit organization.” 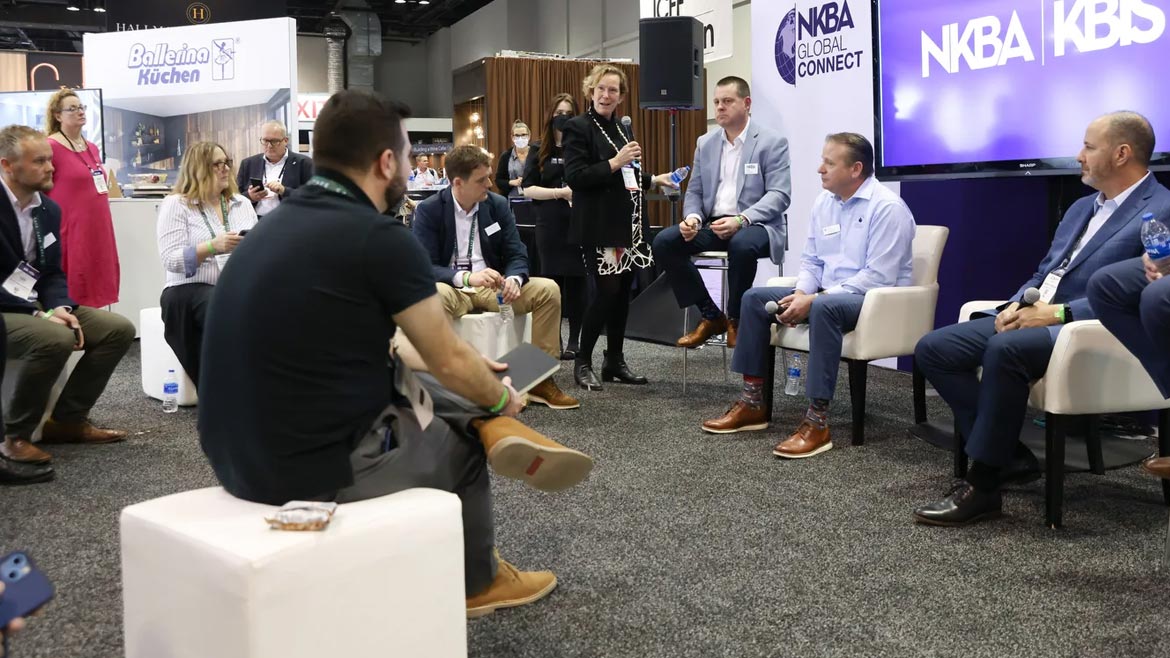 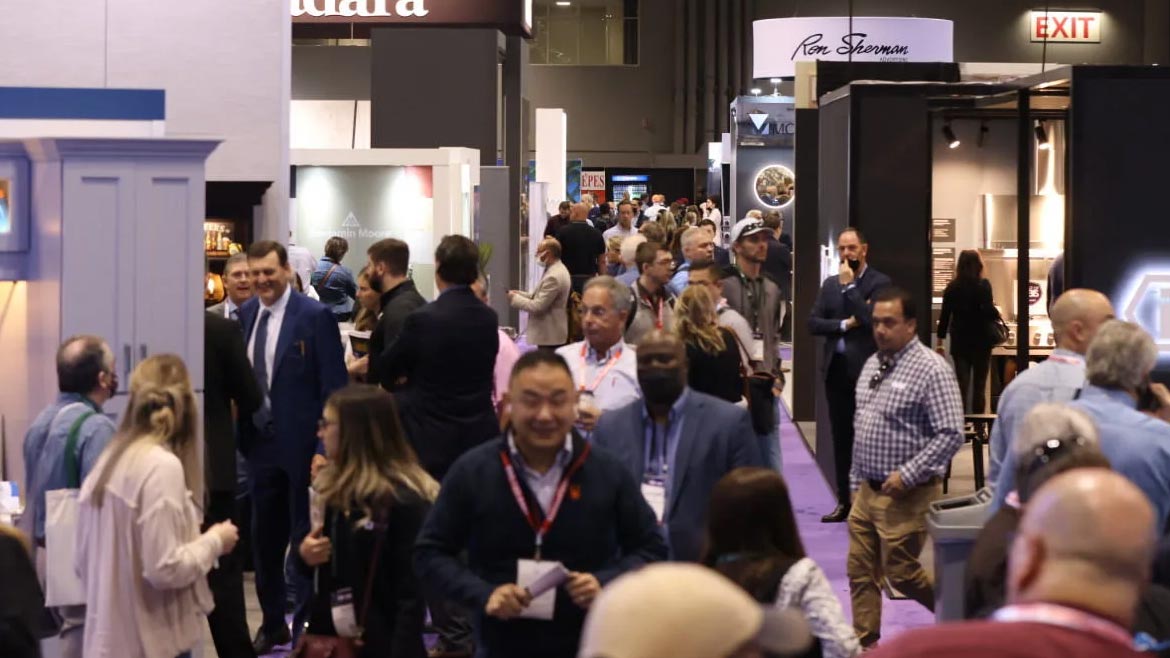 KBIS will return to Las Vegas, Nevada January 31-February 2 for the first time since 2020.

Prior to joining NKBA in 2006, Darcy spent most of his career in motorsports holding responsibilities at the Roger Penske owned speedway and in corporate sponsorship for NASCAR. Although the two industries couldn’t be more different at face value, Darcy’s experience in a face-paced, for-profit structure was exactly what NKBA needed.

“I’m sure when I first joined there were questions about what a ‘car guy’ was going to do for the kitchen and bath industry,” he says. “But I believe business is business and if you put passion and energy behind hard work you can succeed at whatever you’re doing.”

In 2011, five years into his term at NKBA, Darcy was promoted to Executive Vice President. He would go on to become CEO in 2012.

“I noticed there was quite a bit of opportunity that was unrealized within the association… so I first identified technology and for-profit mentality as two areas where we could improve,” Darcy notes, adding that focusing on these two initiatives led him to re-think how the association’s governance structure should operate.

“NKBA was functioning as many trade associations still do, with outdated governance structures that limit the ability for staff leadership to be nimble and quickly move the business forward,” he said, pointing out that NKBA’s board of directors had 29 seats. “Anytime you get past 12 people, it’s nearly impossible to make a decision.” 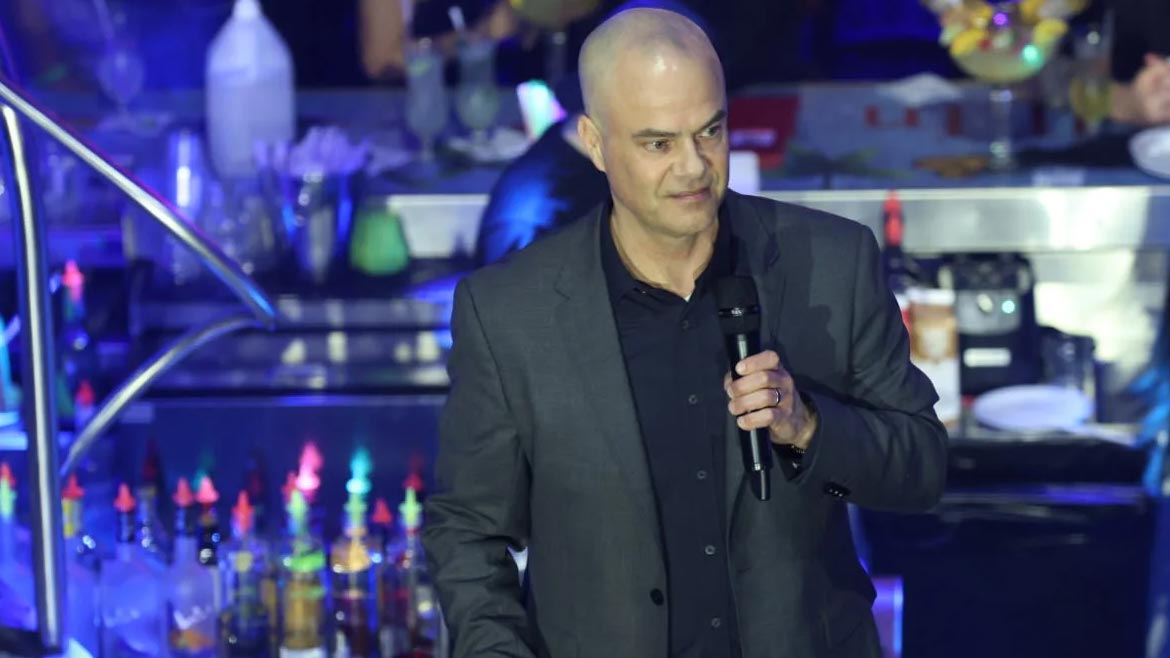 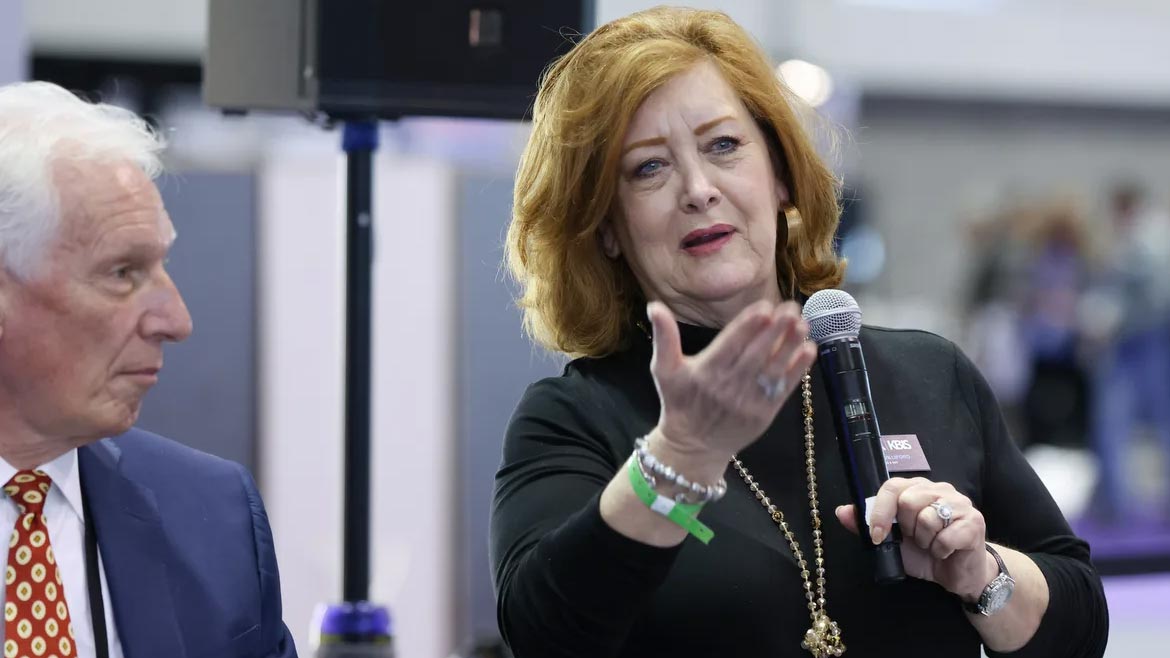 In order to see NKBA evolve in the way it needed to, Darcy knew he had to push for change. “I was by no means a governance expert, but I understood that a disruption was needed to get the energy back into NKBA and allow the visions I had for its growth to work.”  NKBA had several board members who supported this vision and led the charge: John Morgan (2013 Past-President), John Petrie (2014 Past-President, and Mark Kovich, the first to be the chairman in the new governance in 2016, as well as Lorenzo Marquez (2017-2018 chairman).

Heading into the eighth year with the new governance structure, which now includes a nine-member board, Darcy says the shift has been life-changing from an association standpoint. “I am able to be responsible for the things I am supposed to be responsible for, while the board has fiduciary power to oversee and ensure we stay in our lane.”

Darcy says that some of the most influential people in the kitchen and bath industry are on the NKBA board, making it an incredibly impressive group of strategic leaders. “I truly believe the package we have now of working hard and with an innovative vision, all supported by the executive leadership, is why we’ve seen so much success.”

Darcy takes tremendous pride in the NKBA team, which was built and maintained through all the changes.  “With this team and our ‘BeTheBest’ culture,” he says, “we’ve succeeded with over 90 percent retention of our membership that’s growing each year, along with continued growth in revenue.

NO FEAR OF FAILURE

Something else Darcy has brought to NKBA is a love of change and disruption.

“I love change and disruption and very much accept failure,” he says. “I’ve tried to instill in our culture not to be afraid to fail or make mistakes. The only way we are going to get better is by trying something new and taking risks.” 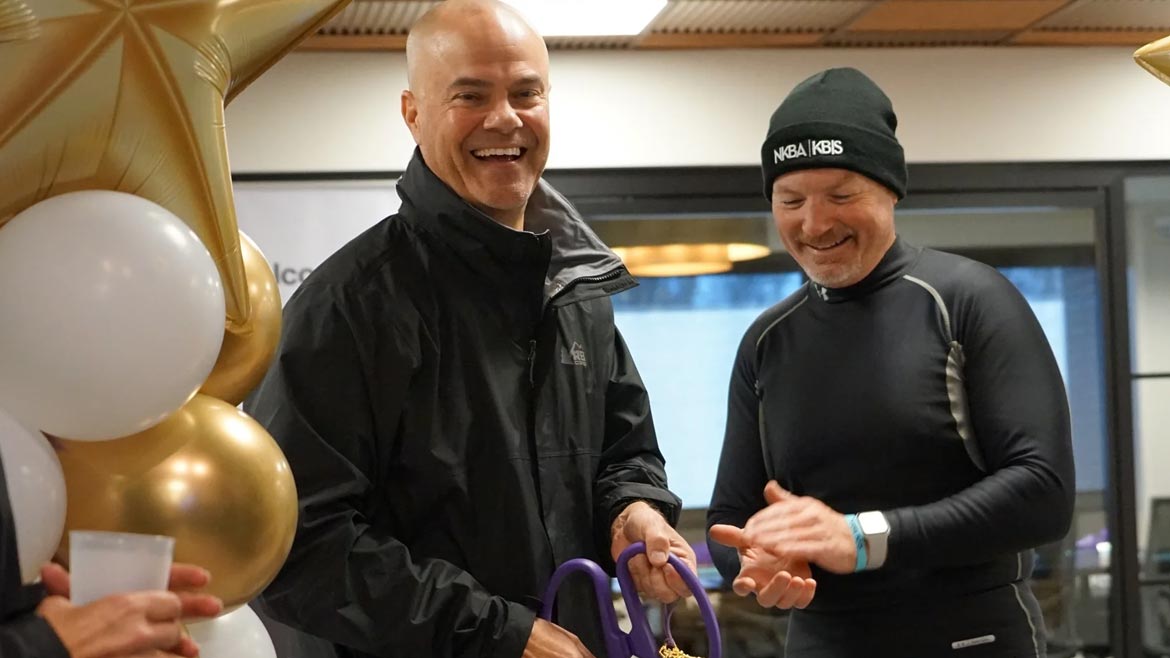 Earlier this year, NKBA moved from its longtime headquarters in Hackettstown, New Jersey to a new facility in Bethlehem, Pennsylvania 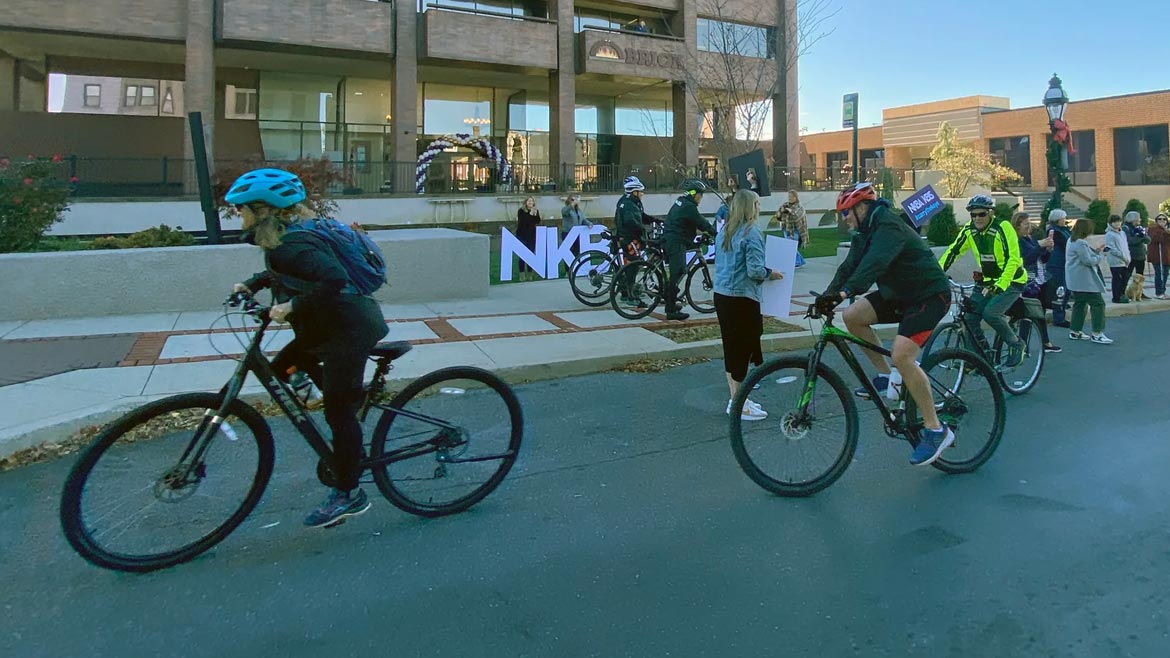 One example of Darcy’s lack of fear to disrupt was when he hired Suzie Williford, now NKBA’s chief strategy officer and executive vice president of industry relations. Williford was a kitchen and bath industry veteran with decades of experience running showrooms. She was also a volunteer member of the NKBA board, which meant hiring her could ruffle some feathers in the sometimes-political association world.

“I was actually just seeking out Suzie’s experience and expertise for advice about NKBA’s governance, but it turned out that she wanted to be a part of what I was doing,” Darcy says, adding that it made perfect sense to hire Williford due to the respect and influence she had in the industry.  “At the time, I told people this would either be the best thing I ever do or the worst, but I’m going to take the risk because it feels like the right thing to do. And it was. Suzie has been an integral part of NKBA’s evolving success over the past several years.”

What better way to celebrate a big anniversary than to move into a new space? In the fall of this year, NKBA moved from its longtime home in Hackettstown, New Jersey, to Bethlehem, Pennsylvania.

“When we thought about how quickly our world has changed in the last two years, the shift to a work-from-home mentality, the rapid embrace of everything digital and the emphasis on flexible space, I have to say a light bulb went off,” Darcy says. “We looked at our building and recognized that we didn’t need that type of space anymore…and discovered along the way that we needed to change how and where we operated to fit the new paradigm.”

After seeing the changes in NKBA’s operations since the digitization of the world through COVID-19, Darcy decided to sell the association’s old building and move. At the first in-person staff meeting since COVID-19, Darcy proposed the idea to his team. To his surprise, everyone was on board with no hesitation, including NKBA’s then Board Chair, Michael Mahan.

The new location is part of an 11-floor building with other tenants and surrounded by colleges, great restaurants and hotels. The office space, which takes up the entire third floor, has a modern industrial design.

“I wanted to provide a place that people wanted to be in and felt inspired and energized while they are here,” Darcy says, adding that the goal is to host people not only in the building but also in the surrounding city of Bethlehem. Hotel Bethlehem was recently named the Number One Historical Hotel in America by USA Today and Downtown Bethlehem made the top 10 list of best downtowns from USA Today.

“After COVID we needed inspiration and action,” Darcy says. “I want to be in a place that inspires people to connect and spend time both inside and outside of the office in the community.”

Ten years after Darcy and his team succeeded in the hefty undertaking of co-locating  KBIS and IBS, the enormous design industry trade show returns to Las Vegas January 31-February 2, 2023.  This year, however, DCW is expanding to include the Las Vegas Winter Market (LVMKT) and the National Hardware Show (NHS). The co-dated shows enable one registration to get an attendee access to all four industry trade shows.

In 2022, KBIS and IBS in Orlando, Florida, had about 72,000 attendees — a number that stunned them since, as Darcy says, they weren’t sure what to expect since the world was on the heels of dealing with the Omicron variant of COVID-19. Although the numbers were fantastic, attendance was still down compared with pre-pandemic years.

The goal for 2023, Darcy notes, is to be back to pre-COVID numbers.   “We’re back, and ready for 2023 to be our biggest event yet.”  No doubt, this will also be due to the return in 2023 of popular KBIS programs such as NKBA Voices of the Industry, the KBIS NEXT Stage and NKBA Global Connect.

Inflation and a slight slowdown in demand may affect the kitchen and bath industry in 2023, but NKBA still represents the two most vital rooms in the home.  “We are essential and the focus on the home is not going anywhere,” Darcy says. “I anticipate the energy and passion to be evident at KBIS 2023 and we are ready for a record-setting show.”

With so many moving parts in such a large trade association, Darcy defines NKBA as a community and global connector of professionals & organizations who work together to create beautiful and functional kitchens and baths. “The incredible effort and drive I witness on a daily basis make the opportunity to lead and support the NKBA team a truly rewarding experience,” he says. “I couldn’t be prouder to represent this great industry and look forward to continuing to work hard to advance our mission!”