During Winsupply’s annual awards gala and vendor showcase, in Dallas, Texas this March, Supply House Times Chief Editor Natalie Forster sat down with four Winsupply Local Company presidents and the President of Winsupply Inc., John McKenzie. The intention of this roundtable discussion was to gain a pulse for the marketplace, talk technology in the warehouse and tackle supply chain disruption, but the conversation took on a mind of its own, revealing a whole new story altogether: The unique business model behind the Winsupply Family of Companies.

The Winsupply Family of Companies is made up of more than 600 locations nationwide, each owned and operated by a local president. The company’s slogan is “Spirit of Opportunity,” and if you’d listened in on this roundtable, you’d understand it’s much more than just a slogan. These roundtable participants did not hold back in sharing their passion for the opportunity and impact Winsupply has had on both their careers and lives altogether:

A few minutes into the discussion, the participants were asked to describe Winsupply’s unique business model. Spitzlberger jumped in to share how he learned of the opportunities for growth to ownership the company offered, noting that after visiting a career fare in Nebraska and hearing from a handful of local company presidents, he “knew within five minutes that’s what I wanted for my life.”

“Almost all of the presidents I met that day started as a truck driver or in the warehouse,” he said. “This model is set up so that I get to lean on hundreds of years of experience, giving me confidence to make decisions, along with the support and data I need to succeed at my company. If you do what we do and don’t have a support system to call on, it can become a lonely and stressful place really quick.”

Everyone at the roundtable agreed that the size and scale of Winsupply doesn’t mean the family-like culture isn’t prominent. Van Lear, who’s been a president for eight years, initiated a peer group of about 10 local company owners, stretching from Ohio to San Diego.

“I wanted to gather a group of us who desired to grow, learn from each other and push each other,” Van Lear said. “We meet once a quarter, have a text chain that never stops and numerous phone calls. We do life together; we truly are family to one another.”

McKenzie emphasized the importance of formal and informal peer groups within Winsupply’s model.

Knab noted how invested each and every local owner is in their company, fueling nation-wide investment in the success of each Winsupply company.

“A big part of the success of each of these owners is that we’re invested; they’re running their own business and just like any mom and pop entrepreneurial business, they’re invested in its success,” he said. “And it is a bigger family. Anyone is always willing to help someone else.”

Last year, Winsupply launched a president scholarship program which acts as both a recruiting and mentorship vehicle for potential owners to learn from current owners and either take over a company or start their own.

“There’s so much informal mentoring that happens as well,” McKenzie pointed out. “We have interns coming right out of college and interns who aren’t even 18 years old yet; we’ll take anyone with potential and mentor them. We know our culture is different, so we hire for culture and teach skill later.” Although it’s a national company, Winsupply doesn’t use the word “corporate,” it refers to its headquarters team in Dayton, Ohio as the “Support Services Team.”

The Support Services Team makes sure the local owners know that help at Winsupply is unlimited, as long as they’re willing to ask.

“All of us at Winsupply Inc. headquarters focus our energy every single day towards supporting the owners,” McKenzie said. “We have only one desire: That each of these entrepreneurs has the opportunity to achieve the highest level of success.”

McKenzie added that the individual owners have complete autonomy in their operations, and are treaded as completely independent companies — owners can even invite whoever they want to sit on their boards, purchase inventory from wherever they want, have their own balance sheet, create their own hours of operation, and the list goes on.

“It’s hard for people to believe how we operate,” he noted. “These owners’ companies are completely autonomous, and Winsupply in Ohio has little to nothing to say about it. The owners’ decisions and reaction to the market matter; they are each experts in their market and have the ability to make the decisions that are best for their companies.”

McKenzie always says, “Branches are for trees — we don’t have branches, we have companies, and they’re treated as such.”

Unlike a traditional corporate structure, Winsupply Inc. doesn’t work from a top-down mentality.

“In a traditional corporate structure you’d have orders and decisions being made from the company’s president just because they said so,” McKenzie pointed out. “The Support Services team is simply there to support the local company owners.”

“Winsupply Inc. has no other desire than to invest in infrastructure that allows for the unlimited growth of the organization, granting the local companies the opportunity to grow without limitation.”
– John McKenzie, president, Winsupply Inc.

The phrase “life changing” was heard many times throughout not only this roundtable discussion, but during the Annual Local Company Awards Ceremony and Gala as well. During acceptance speeches, countless award winners referenced their choice to join Winsupply and become a company owner as life changing.

“I had been in the army for four years and knew nothing about plumbing or wholesaling, but six months into being with Winsupply, I wrote a check for what was most of the money I had as a 27-year-old with a two-year-old daughter to purchase my ownership,” Van Lear shared. “It has absolutely changed my life.”

Spitzlberger shared that coming out of college, where he worked four jobs to help support is family, he had an opportunity to play pro football in Europe after graduating. “I was seriously considering giving up that dream to take a job with a manufacturer to have a steady income,” he explained. “I had an offer from Terry Okamoto at Winsupply of South Denver to go the traditional route with Winsupply, starting in the warehouse, but I turned it down to accept the offer at the manufacturer to start out making more money for my family right away.”

Winsupply saw potential in Spitzlberger, so not only did they offer him a sign-on bonus to cover the immediate expenses he was worried about, but they told him to go play football for a year and then come join the Winsupply team afterwards.

“For this, I am forever indebted to Winsupply, and I have a drive to never let them down,” Spitzlberger said. “At 24 I wrote a check to buy ownership in my company. Winsupply has changed my life in a drastic way. It gives me the ability to live freely and lead others to take advantage of the same opportunities.” 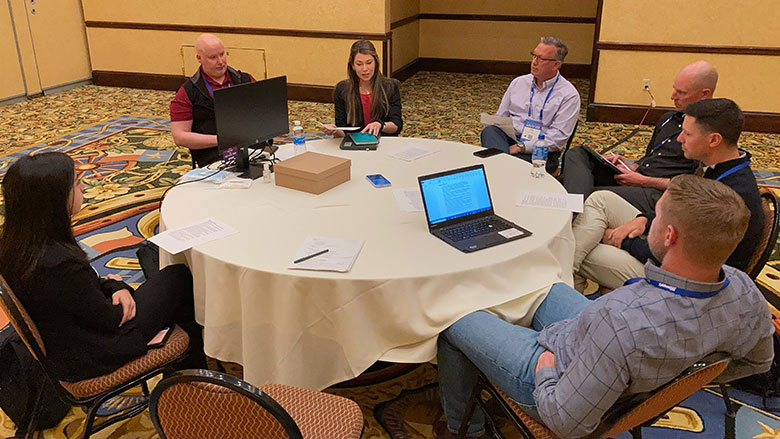 Because of the local company owners’ passion for the Spirit of Opportunity Winsupply embodies, they want to pay it forward to the next generation of potential entrepreneurs and company owners, whether that be financially and/or through mentorship.

“You hear people who’ve created success and financial freedom for themselves, their family and their employees develop this burning desire to pay it forward to someone else,” he said. “There’s this self-accountability within these owners where since this business model has changed their life, they want to replicate that experience for as many people as possible.”

The pay it forward mentality doesn’t just apply to the presidents of the companies. “The Win model not only supports the president level, but it supports throughout every level of the business and our employees,” Van Lear said. “On a daily basis, we’re able to create change for any position in our company, for people that are willing to do the hard work and help build the business.”

Drinkard shared a story of a time he heard a local company president asking around to find a newer local owner who needed help financially to buy their shares, simply because someone had loaned him hundreds of thousands of dollars to do so years before, and he felt it was time to pay it forward.

McKenzie pointed out that the Winsupply model and culture becomes a part of people’s lives.

Winsupply Inc. achieves a lot of attention for its multitude of acquisitions, but according to McKenzie, the fuel behind each and every move the Support Services team makes, is to offer the highest level of success for the local companies.

“Winsupply Inc. has no other desire than to spend the next few years investing in an infrastructure that allows for the unlimited growth of the organization. Much of what we do out of the Support Services group is build our distribution network, technology, human capital initiatives, training, logistics and innovation,” he said. “We do these things because we want the organization to naturally grow, granting the local companies the opportunity to go grow without limitation.”