Lochinvar — Innovator In Energy-Efficient Boilers, Water Heaters & Pool Heaters
Lochinvar has a long history as an innovator in energy-efficient boilers, water heaters and pool heaters. One of their most recent innovations is the SMART SYSTEM™ operating control, which provides LCD readout of setup, system status and diagnostic data in words, not codes. In addition to other advanced features for precise system control, SMART SYSTEM includes a built-in cascading sequencer, which can control the operation of up to eight modulating boilers or water heaters, eliminating the need and cost for a separate third-party sequencer. SMART SYSTEM is now standard equipment on these Lochinvar products.

KNIGHT™ Condensing Heating Boiler
With seven models ranging from 80,000 to 500,000 Btu/hr, and up to 98 percent efficiency, KNIGHT can literally cut home heating costs in half. The KNIGHT Heating Boiler also features fully modulating 5:1 turndown, which allows the boiler to generate the precise amount of heat to provide a consistent, stable indoor temperature. Since the KNIGHT is able to adjust heat output according to demand, fuel use is kept to an absolute minimum. KNIGHT also features direct-vent design, which allows for up to 100 feet of air intake and 100 feet of flue gas exhaust with PVC pipe. 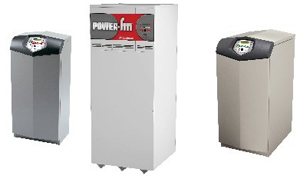 Power-Fin® Commercial Hydronic Boilers and Water Heaters
In 1986, Lochinvar introduced the innovative Power-Fin boiler and water heater line. While many new features have been added to Power-Fin over the years, the company has reached new heights on the 1.5 million, 1.7 million and 2 million Btu/hr models. With expanded 5:1 modulation and the addition of the SMART SYSTEM operating control with an internal sequencer, these 87 percent thermally efficient Power-Fin units deliver an unprecedented level of performance in multi-unit applications in a compact footprint.

ARMOR™ Condensing Water Heater
With thermal efficiencies up to 98 percent, inputs up to 500,000 Btu/hr, a stainless-steel heat exchanger, 5:1 modulating turndown and the SMART SYSTEM operating control, the ARMOR water heater stands above the competition. In addition, ARMOR is designed to be installed with a separate storage tank, eliminating many potential problems encountered with traditional tank-type water heaters. The unique ARMOR design protects against the harmful effects of lime scale buildup, which can cause a traditional heater to fail in as little as two to five years and substantially increase operating costs. For example, just 1/4-inch of scale in a traditional tank-type water heater can increase operating costs by as much as 25 percent. Since ARMOR heats the water and then deposits it in an unfired storage tank, lime scale buildup does not impair the unit's heat transfer efficiency, so operating costs stay low, where they belong!