The case for the master mixing valve

Hot water has been around since man first harnessed the power of fire, but when at elevated temperatures it is dangerous and even deadly. Today’s hot water heaters offer a diverse range of technologies that perform leaps and bounds ahead of their predecessors, but what temperature should they deliver? Some facilities may simply set the heater to a usable temperature, but while this may seem like an acceptable practice, there is an issue that needs to be addressed: Legionella.

One of the biggest concerns for hot water systems in commercial buildings is legionella bacteria.  Legionella is a bacterium that enters the human body by inhalation and aspiration of water droplets and is responsible for Legionnaire’s Disease, a bacterial infection of the lower respiratory system that often gets misdiagnosed as pneumonia; one in 10 people who contract Legionnaires Disease will not survive. Figure 1 shows a legionella growth chart, which displays their growth behavior. These organisms live and multiply in water between 68-122° F, and thrive in water 95-115° F. At 121° F, legionella bacterium stops multiplying, but is still present in water.

Legionella growth in water with relation to temperature

There are many ways to combat legionella in a domestic hot water system. UV ray treatment is a method used to treat bacterial removal, however, additional heat is the most common method. Since the first clinical study was done in 1977 by the Allegheny County Health Department, more and more commercial water heater systems are heating to temperatures above 140° F to kill the bacteria. Since then, the plumbing design industry generally follows the ASHRAE 2000-12 guideline, which suggests thermal disinfection by sending hot water 165-175° F through the domestic hot water system. 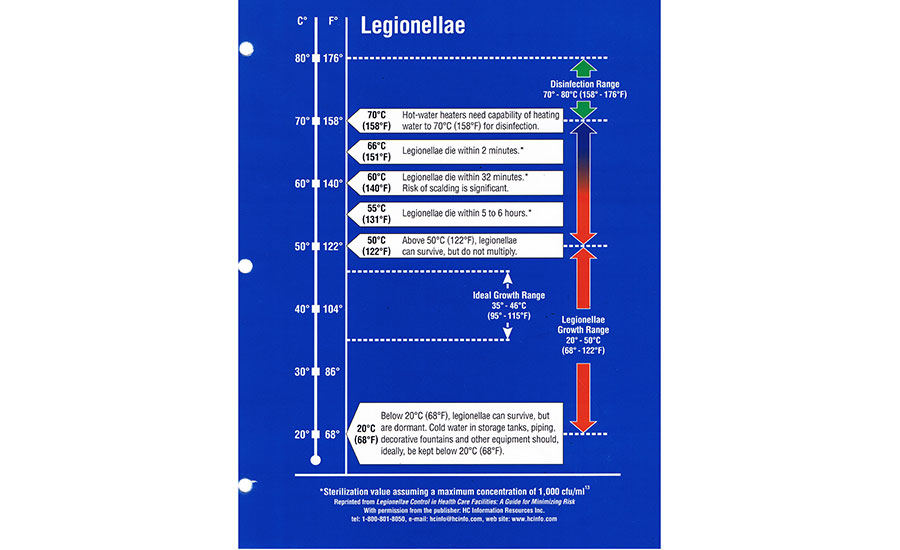 These higher temperatures, while necessary, pose a scald danger for end users. This is where a master mixing valve becomes extremely valuable. A master mixer is regularly used to reduce the temperature down to a more usable area (between 124-130° F), and then circulated throughout the building. A portion of the return water from the domestic hot water line is sent back to the hot water source to be reheated, which helps keep legionella growth in check.

Master mixing valves provide a buffer between the high temperature heat source and end point fixtures. Hand washing faucets in public restrooms will typically have the hot water supplied from a small point of use mixing valve. The presence of these valves will tempt designers and contractors to skip the installation of a master mixing valve. While this does work initially, the building is at a higher risk of scalding end users since these small valves are often forgotten and not well maintained. Over time these valves will fail and potentially allow “full hot” through them. If “full hot” is 140° F or above, the risk of scald is significant. By installing a master mixing valve, “full hot” is tempered down to the fixtures keeping a set temperature safe for end users. For reference, Figure 2 shows a water burn chart so that the danger can be fully appreciated. 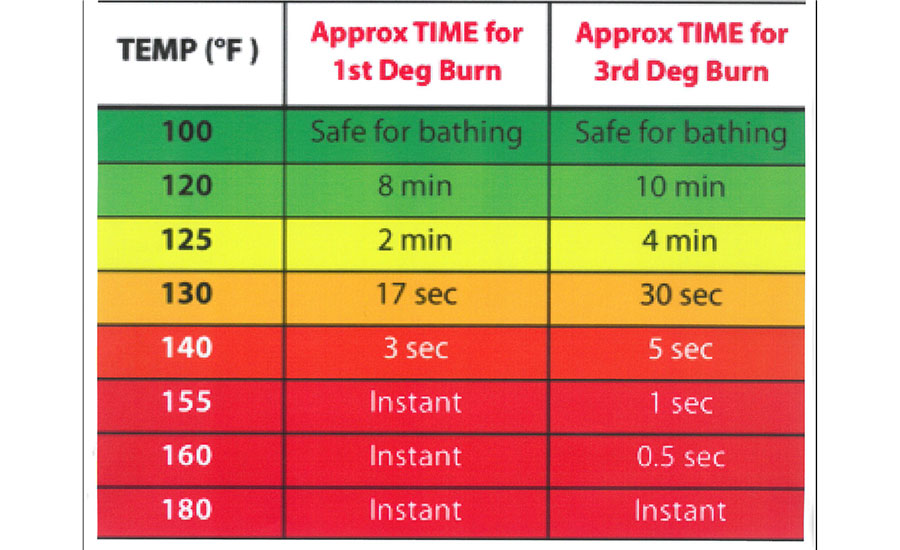 Master mixing valves also keep domestic hot water temperatures consistent, even with large inlet temperature changes. As part of the ASSE 1017 certification, all master mixers must control the outlet temperature within a specified range from the initial set point when there is a 25° F increase to the hot water inlet temperature. The allowable variance can range from ±3° F to ±7° F, depending on the size and flow rate.

Energy and cost savings are other benefits of installing a master mixing valve. Instead of having to heat 100 percent of the hot water needed for the building, the heater is only needed for a fraction of that when a master mixer is present in the system. Consider a system that requires a domestic hot water temperature of 125° F. If the hot water supply is set to 140° F with a mixing valve installed downstream, 83% of the volume needs to be heated, assuming the cold water temperature is 50°F. At 160°F only 68% of the domestic hot water needs to be heated. This reduction will save the facility energy and the system becomes environmentally friendly. In addition, since the heaters are heating a lower volume of water, a smaller unit may be sufficient and wear and tear to the heater and related equipment is reduced.

Rick Cota is the vice president of technical services at Leonard Valve.

Eric Costa is a mechanical engineer on the Leonard Valve Engineering Team.