PHCP-PVF industry continues to advocate for legislation and standards optimal for water conservation and efficiency.

PHCP-PVF professionals throughout the supply chain are always concerned with ensuring clean water is delivered to communities in an efficient manner. Thankfully, industry associations and organizations are constantly working to advocate for the best legislative and code changes that benefit the industry and the communities it serves. Aging infrastructure, balancing efficiency with water safety, maintaining and strengthening the EPA WaterSense program and reliable efficient product innovation are among the top concerns.


Infrastructure and the new administration

Christoph Lohr, vice president of strategic initiatives at IAPMO, explains there is some hope for an increased commitment to water conservation under the new administration.

“At the federal level, we are already seeing Congress, the Biden Administration and incoming agency officials place a high priority on conservation efforts,” he says. “President Biden is expected to unveil his major infrastructure package, which may include critical water provisions. Further, early discussions with the new incoming U.S. EPA leadership already indicate an increased level of commitment to water conservation and plumbing resiliency.”

Aging water infrastructures is a huge concern for many areas of the country. Salvatore Pennachio, eastern regional manager for Niagara Conservation, a manufacturer focused on water and energy-saving technologies, says population growth is putting strain on already aging infrastructures.

“Managing water is a growing concern in U.S. cities as they look at challenges regarding water supply, water processing and how to update aging water treatment and delivery systems,” Pennachio notes. “Many states are continuing to update their standards to improve water conservation and there are a variety of federal and local incentive programs that encourage water conservation.”

One example of state initiatives is that of Texas, California, Georgia and New York who have mandates for new construction requiring that toilets must be 1.28 GPF or less. Additionally, The U.S. Department of Housing and Urban Development (HUD) offers a significant Mortgage Insurance Premium Reduction (MIP) incentive when green certification and energy benchmarking are pursued. 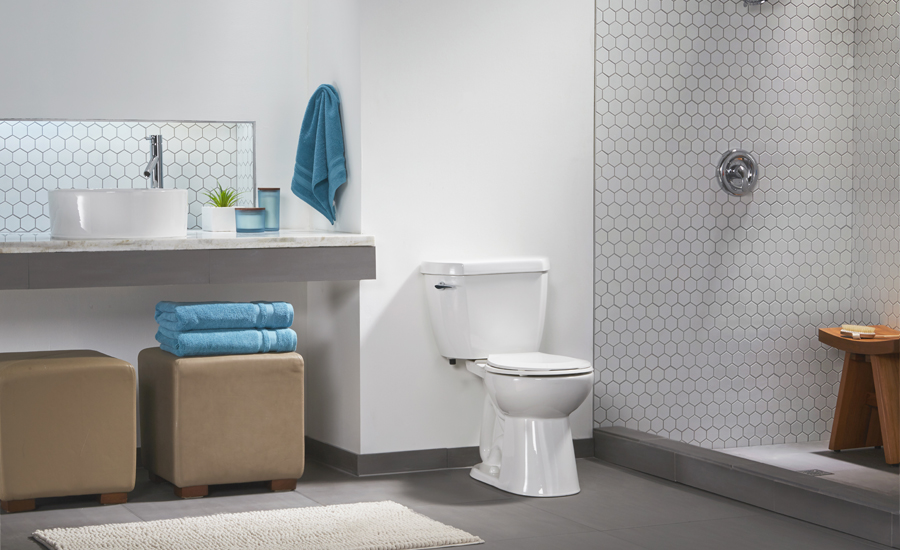 Niagara notes its Stealth Technology innovation offers enhanced efficiency and conservation already, and it continues to improve. The vacuum-assist technology allowed Niagara to be the first to put a 0.8 GPF toilet on the market with a powerful flush that users expect. Photo courtesy of Niagara Conservation.

“Many builders are incentivized through programs like LEED and USGBC/NGBS to include toilets that are 1.0 or 0.8 GPF.” Pennachio says.

Speaking to infrastructure concern, Lohr says FEMA and other government agencies are putting a premium on “resiliency” measures for buildings. “Plumbing is obviously just one component of this, but I am seeing the start of a trend that some jurisdictions are talking about it more and more. The Biden administration appears to want to tackle infrastructure issues, which means those 'downstream' will follow suit, as well.”

When thinking about water efficiency, energy production and efficiency is a factor as well; pumping, heating and treating water all requires energy. Kerry Stackpole, CEO and executive director for Plumbing Manufactures International (PMI) explains the absence of sufficient energy is a concern.

“Some states have certainly started proposed legislations for 2021 including ways to promote energy efficiency,” Stackpole says. “Consumers and their local legislators are pretty savvy, so I think they’re stepping up to figure out solutions in those areas where energy is in limited or short supply.”

“As we continue to strive for increased water conservation and efficiency, we have found that building water systems and quality of the water within the building start to experience increased levels of contaminants mainly due to the ‘water life’ within the system increasing,” Kendzel adds. “It’s important that codes and standards, as well as regulations designed to reduce water use and set requirements for plumbing fixtures, do not go below the existing U.S. EPA WaterSense Program requirements.”

According to Lohr, balancing water sustainability and water safety is vital, and the plumbing industry is at a nexus point.

“For so the last decade-plus we have focused entirely on water sustainability, unfortunately often in a non-holistic way. As a result, we have created conditions that likely contributed to the amplification of waterborne pathogens during that time,” Lohr says. “The COVID-19 crisis exasperated these fears due to the massive number of vacant buildings with stagnant water. In addressing safety concerns we don’t want to swing too far the other way, or we likely create conditions that further accelerate our water supplies drying.”

Lohr explains that water efficiency is just one component of plumbing resiliency, and IAPMO has been and continues to work towards standards to find the balance between safety and sustainability.

“In 2018, IAPMO released the Water Demand Calculator (WDC), which vastly improves water efficiency by reducing the size of domestic water piping systems for the first time in 70 years,” he says. “During the COVID pandemic, IAPMO worked with the American Water Works Association (AWWA) to produce the “Responding to Stagnant Water” document and is currently working on “The Manual of Best Practices for Safe Closure and Reopening of Buildings,” which provides additional guidance on flushing.”

WaterSense, created by the EPA in 2006 as a program to promote water efficiency by creating a label for consumer facing products that have been certified, continues to grow and encourage water conservation.

Stackpole again points out that consumers are becoming more and more savvy, which is reflected in the success of the WaterSense program. “There are now over 3,800 toilets that match the WaterSense specification,” he says. “We’ve seen double digit growth in available products over the past five years, not only in toilets, but in faucets and shower heads, urinals, flushometers; almost any type of plumbing product.”

Stephanie Salmon, Washington representative for PMI agrees, saying consumer demand for water efficient and money-saving products throughout the is continuing to grow. “WaterSense has a special label for homes that meet consumer efficiency demands — the WaterSense Specification for Homes,” she explains. “In February, WaterSense released version 2.0 of this specification, which ensures WaterSense labeled homes are at least 30% more water-efficient than a comparable home using typical new construction.”

“Americans are becoming more and more concerned about their water usage as several reports point to climate change and population growth causing water shortages in most of the United States,” Pennachio says. “Many municipalities have rebate programs in place if residents select and install WaterSense products in their homes.”

Kendzel says ASA uses WaterSense specifications as the benchmark to measure state legislative activities. “We’re advocating for a national efficiency standards to avoid conflicting state and local requirements, which leads to confusion in the marketplace and increased costs for complying with varied requirements,” he explains. “Our efforts this year are focused on monitoring and commenting on various state legislations, ensuring they are consistent with WaterSense specification, and the implementation dates of the legislation are based on a manufacture date and not a sell date.”

Lohr again notes that plumbing fixtures must continue to become more efficient, but not at the expense of safety. “WaterSense certification will become more important to consumers, but we also need to pay attention to our supporting infrastructure, such as the way we size the piping systems connecting to the fixture,” he says. “We need to have both WaterSense products and right-size systems or we are sacrificing safety on behalf of sustainability.

Again, balance is key and plumbing resiliency is the answer.”

On a federal level, Kendzel says the most significant proposed legislation is related to improving the infrastructure of water distribution systems. According to the U.S. EPA, the volume of water lost through distribution systems is 1.7 trillion gallons per year, at a cost of $2.6 billion.

Additionally, ASA recently joined the Alliance for Water Efficiency (AWE) and worked appeal on recent decisions made by the Department of Energy related to the interpretation of the testing of multi-head shower heads. Kendzel notes that since at least 2011, DOE has been clear that showerhead manufacturers and distributors may only sell showerheads in the U.S. with a maximum flow rate of 2.5 gpm, regardless of how many nozzles the showerhead may have.

Kendzel adds that DOE’s redefinition of “showerhead” would put ASA members at a significant competitive disadvantage. “Foreign manufacturers are and have been free to manufacture and distribute showerheads outside the U.S. that exceed the Energy Policy and Conservation Act standards,” he says. “ASA and its members are concerned about foreign products ready for sale and distribution in the U.S. that take advantage of DOE’s ‘showerhead’ redefinition, but would not have been compliant under the previous rule.”


Focuses for the year ahead

As 2021 continues, especially under the new administration, PHCP-PVF industry advocates have many goals in terms of water efficiency.

“Education is who we are at PMI, and that’ll continue to be the focus moving forward,” Salmon says. “There are almost 70 new lawmakers, including some in states like Georgia where we have a really strong presence. So we have reached out and will continue to reach out to educate these lawmakers about the great things our industry is doing.”

Salmon notes PMI plans to have meetings with the Department of Energy, the EPA and the department of transportation in order to advocate for water infrastructure spending and to help get water-efficient products and supplies where they need to go.

Kendzel says ASA is engaged in several codes and standards updates regarding water efficiency and conservation. “Recently, I had the opportunity to chair a task group which developed draft proposals for the alternative water sources,” he notes. “Specifically, the proposals address requirements for blackwater recycling equipment and storm water recycling equipment. The proposed changes have been submitted for consideration and adoption to IAPMO and Water Efficiency Standard (WE-Stand).”

On the product development side, Niagara explains flush performance, reliability, cleanliness and efficiency are all top-of-mind when designing toilets. “Our patented Stealth Technology has answered consumer concerns,” Pennachio says. “The vacuum assist technology utilizes both air and water to create a powerful, quiet flush, an extra-large water spot and superior line carry at only 0.8 GPF.”

All parties agree education and research are key for the continued push for efficient and safe water usage. “ASA is advocating for research initiatives related to the impact of increased water efficiency and reduced consumption on the entire building plumbing system,” Kendzel notes. “As the use of recycled water continues to grow within the building environment, it is critical that the recycled water is maintained to specific quality characteristics to ensure it does not have a negative impact on the performance and life of the plumbing system and its fixtures.”

Lohr stresses the importance of education within the industry. “In order for industry to take the next step and find balance between sustainability and safety, we need to be smarter and think more holistically,” he says. “This means attracting and retaining the brightest and best. It likely means everyone’s job will require more from them, but we don’t really have a choice — especially as water shortages and increasing water quality issues loom.”